May sure has flown by.  I hope your month has been profitable.  Have you gotten Google Analytics set up on your site yet?  If you need some help, hit that reply button and let me know!  One of my clients is so excited by his Analytics data that he checks it first thing every morning.  It’s always a pleasure to see someone take the ball and run with it.  This month…

This month I resolved to exclude Google from the newsletter.  I was going to talk about customer retention strategies.  It’s all the rage these days, what with the economy and all.

Then I watched a video on YouTube. This video blew my mind. It was the first announcement of a new Google product that will change the world, and how we communicate. So, I’ve decided to depart from my usual format and tell you about what I saw.

Google’s developer conference, Google I/O 09, took place May 27 and 28, this past Wednesday and Thursday.  Thursday evening I saw on twitter that the Google Wave Developer Preview from the conference was available on YouTube.  Wow.

Google Wave is now being tested and extended by all the conference attendees, with the first accounts outside Google.  It is a ‘communication and collaboration tool’ to be released later this year.  It integrates the functionality of e-mail, instant messaging, collaborative authoring, media sharing, and discussion forums into a single interface using a single protocol.  The whole thing, server, protocol, interface, is free and open.

Okay, honestly, you have to see it.  It’s such a paradigm shift that I can’t just write up an explanation that will truly impress upon you what Google Wave is.  I’ll do my best though, as the video is geared toward a tech-literate audience, and is an hour twenty minutes long.  If you want to dive in, they start showing Wave itself at about 7:30 in the video.

Here’s the interface to Google Wave:

This all happens inside a web browser.  On the left are your folders and contacts.  In the center is your in-box on the right is a Wave.  A Wave is very versatile.  It can be an instant messaging conversation, an e-mail, a photo gallery, a collaboratively authored document, or even a game of chess.  Basically it can carry out any type of communication we do on the internet.

All these varied forms of communication have a unified in-box.  If you send someone an e-mail, and they open it while you have it open you’ll see their response in real-time.  If someone adds photos to a shared gallery the gallery pops up in your in-box.  The Wave adapts to any usage as needed.

Each user on a Wave can edit the Wave.  You could post a list of action items for your team, add the team as users, and everyone could add, comment on, and assign items.  You would see each others changes in real-time, with colored markers showing where others are editing in the document.  You and your spouse could label your vacation pictures together from any two computers before embedding the Wave on a website for your friends to see.

Of course, with everyone editing something you need a way to fix things, and see who did what.  So each Wave has a time line.  You can rewind, and play back all the changes to a Wave.  If you and a friend are playing chess on a Wave you can rewind and see the whole game history, move by move.

Sounds pretty amazing, but I for one would be frustrated that all my data lived on Google’s servers.  Remember how I said Google Wave was free and open?  All the specifications and software will be freely available.  Your company can run its own Wave server on your own domain name.  Wave accounts on your server will be compatible with any other Wave account and you can send Waves to anyone.  However, any waves that are only sent between your internal users will never leave your server.

You’ll be able to have complete control over your data.  That’s what will allow Google Wave to change the world.  If they made it proprietary and kept everyone’s data on their own servers then it would never achieve worldwide use.

One feature that is particularly amazing is real-time translation.  If I speak English and Pierre speaks French, we can type to each other in our native languages and Wave will translate our messages in real-time.  It can handle 40 languages.  It’s amazing.  I was awestruck when I saw it.  It’s at 1:12:00 in the video.

Okay, I’m going on pretty long here, so I’ll wrap up with some highlights and further reading links for those interested.

You can learn more at wave.google.com or check out a good article at CIO.com 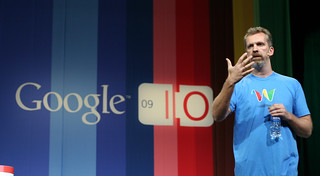